It’s an unusually mild summer afternoon, as ISBVI students make their way down to the track for after-school practice. On this particular Thursday, Coach Dave Brown has his team of 18 students (Grades 7-12) working on endurance, as they go back and forth between running laps and doing various other exercises. 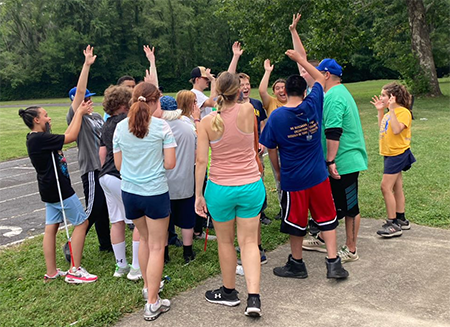 “I’m going to push you today,” he tells his team of athletes at the start of practice before they break up into smaller groups.

Now in his second year as ISBVI track and field coach, Brown has prepared his team for two big meets in the month of September, including a trip to Jacksonville, Ill. for a day meet with the Illinois School for the Visually Impaired on Sept. 21. The school’s track and field season will then come to a momentous ending when ISBVI hosts 11 other schools on its campus for the North Central Association of Schools for the Blind (NCASB) Conference Championship from Sept. 30-Oct. 1.

Heading into the season, Brown wanted the ISBVI track and field team to make strides both individually and as a group.

“Our overall goal is to bring home a Conference Championship,” Brown says. “We also hope to have athletes improve their running times, shot put distances, and jumping distances and heights.”

In looking at the grander scheme of things, Brown also hopes he can prepare the ISBVI athletes participating in track and field to be in shape for any of the other sports they’ll be competing in the rest of the school year.

“Track is a springboard into winter sports, which many of the same athletes participate in,” Brown says. “So by getting in shape in the fall — not only physically but mentally — it will help us continue to succeed in goalball, wrestling, cheer and swimming.”

As someone who took part in middle and high school sports growing up, Coach Brown ultimately sees athletics as a way to teach bigger life lessons as well. For this reason, he hopes his 2022 team can grow both on and off the track. 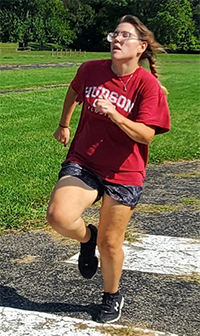 “I am a strong believer that an athlete should not only be athletic, but [that they] should carry a full package of positive attributes,” Brown says. “I want each athlete to not only learn and understand the value of athletic competition, but also the value of solid grades and a good education, as well as a positive character, helping those in need, and never putting anyone down, especially those who are trying their best in a tough situation.  I like to tell my athletes that people will remember you for your character much more than they will for how you competed.”

Now in her senior year at ISBVI, Corey says competing in track and field has strengthened her self-esteem.

“I’ve learned that if you tell yourself you can, then you’re more likely able to,” Corey says. “I’ve gained a lot of confidence, and it’s helped my mental health a lot.”

Much like Corey, Dylan can also speak to the positive impact competing in track and field has on his overall well-being.

“After the day is done, it’s a good way to clear my mind,” says Dylan, also a senior at ISBVI. “You can get out on the track and have all those thoughts just float away.”

Looking ahead to the rest of the season, Corey hopes to improve upon her personal records in the 60-meter dash, shot put and triple jump events. In reflecting on the 2022 ISBVI track and field team as a whole, she believes all the athletes genuinely lift each other up, just as Coach Brown has taught them.

“I love the people that are on this team,” Corey says. “We all really encourage each other. We all get along well. It’s just a really great team overall.”