ISBVI students are now more in tune than ever with the vast capabilities of music technology thanks to the school’s recently updated piano lab. 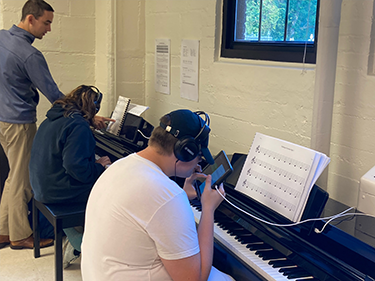 After previously using keyboards that required a floppy disk to track progress in the course, ISBVI music teacher Sean Bradley now has six brand new Yamaha Clavinovas in his classroom, bringing his piano lab into the 21st century of music. The Indiana Blind Children’s Foundation recognized the need for new pianos and worked strategically over the last year to engage its community of supporters in a variety of fundraising efforts ranging from individual donation solicitations to the fund-a-need at the 2022 Through the Looking Glass Gala, raising over $30,000 in support. Local music store, Piano Solutions, worked in partnership with IBCF and the ISBVI music department to identify and install the right pianos and technology at ISBVI.

“The Yamaha Clavinovas all operate with iPads plugged into them,” Bradley says. “There’s a proprietary Yamaha app that works with it. You can change to a number of different instruments and sounds. There are tons of songs pre-programmed in that students can practice along with. The app is also voice-over accessible.”

While the Yamaha Clavinovas present all sorts of new opportunities for sound exploration, Bradley also believes they serve as a great way for ISBVI students to learn more about the latest and greatest in technology.

“The students can just open up their songs — they can record and save on their own as well,” Bradley says. “Not only are they able to do it on their own, but it’s practicing their assistive technology skills. To me, that’s been incredible.”

A sophomore at ISBVI, Minnie has personally enjoyed using the iPads in the piano lab to explore music-making through GarageBand.

“I love writing songs and making music,” says Minnie, a music enthusiast who is also currently in the process of learning bass in the ISBVI band. “That’s why I love GarageBand so much — I want to create songs with it. So that’s mainly why I’m doing piano is because I want to be able to create better music.”

Like Minnie, ISBVI freshman Zavier has found great joy in the new piano upgrades. First and foremost, he’s grateful to finally be rid of the floppy disks.

“Floppy disks are easier to lose. Especially as someone who’s visually impaired, I know how easy it is to lose things like that,” he says with a laugh.