With White Cane Safety Day coming up on Oct. 15, we at the Indiana Blind Children’s Foundation wanted to provide some additional information on the history of the white cane, as well as some things that people should know about Orientation and Mobility (O&M) instruction at ISBVI. 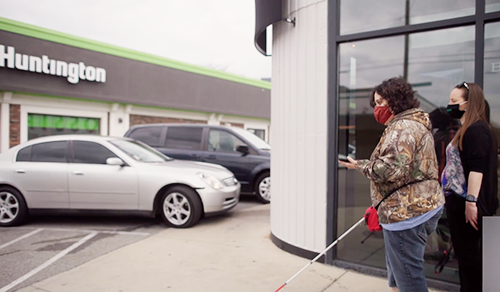 As VisionAware points out, the white cane is no longer just a tool used by travelers with vision loss — it is a symbol for members of the community who are blind or visually impaired. Established in 1964, White Cane Safety Day is observed annually on Oct. 15 to recognize the many achievements of blind and visually impaired citizens, while promoting both the white cane and guide dog as tools for independent travel.

Peoria, Illinois, was the first community to pass a special ordinance for white cane travel in 1930, which granted travelers with a white cane the right of way. Five years later, Detroit passed a similar law, later adopted by the state of Michigan. Then in 1964, President Lyndon Johnson officially declared Oct. 15 to be White Cane Safety Day after a joint resolution of Congress was enacted. (For more in-depth information on the white cane and its history, visit this link.)

Orientation and Mobility Training at ISBVI

VisionAware defines Orientation and Mobility (O&M) as a profession specific to blindness and low vision that teaches safe, efficient and effective travel skills to people of all ages. In further breaking down the term, “Orientation” refers to the ability to know where you are and where you want to go, while “Mobility” refers to the ability to move safely, efficiently and effectively from one place to another.

Each school year, many students enrolled at ISBVI, beginning in preschool, receive individual O&M training from one of the school’s three O&M instructors (Jessica Hunt, Kristen Pierski and Megan DeWester). Students are introduced to using the white cane in the school building, with O&M instructors giving them guidance on how to navigate the school’s hallways and get from one classroom to the next. Once they have this down, individuals gradually advance to different levels of travel outside of the school.

“We slowly start introducing them to neighborhood travel, so crossing the street when you don’t hear any cars coming and that kind of thing,” says Jessica Hunt, O&M instructor at ISBVI. “We then take them to areas like Broad Ripple with small business travel, where they have to cross over driveways and small streets. From there, we’ll progress up to lighted intersections and then public transportation travel. It’s just getting all the kids ready for independent living after school.”

Students at ISBVI progress through O&M training at their own rate, allowing them to fully master the skills they’re taught.

“If you’re a really fast learner, then we adapt the curriculum to that,” Hunt says. “It’s nice because you don’t have a classroom full of kids that are all at different levels. It’s always one on one.”

Stay tuned to IBCF’s social media channels throughout the month of October for more information on the importance of the white cane.