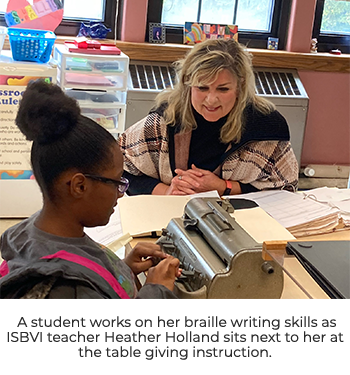 Heather Holland has a deep-seated passion for teaching braille. “I think braille is the coolest code ever,” she says.

Having taught at ISBVI since 1994, Holland worked as part of the school’s Short Course program (now known as L.E.A.D.S., a series of free, quarterly workshops focusing on Extended Core Curriculum areas) for several years, where she first discovered her love for braille.

“My favorite piece was when we team-taught [in Short Course],” Holland says. “Everyone could have their specialty, of sorts. I liked math, I liked Nemeth, and I liked braille, so those were my specialties, while other people might have been stronger in science or English.”

In 2020, Holland transitioned into her current role as braille instructor at ISBVI, teaching middle and high school students how to read and write braille. Considering all ISBVI students have different needs determined by their Individualized Education Plan (IEP), Holland constructs her curriculum to meet each child where they’re at. For this reason, some students may even begin by feeling shapes on a page, before Holland introduces them to braille letters.

“I have students who are just beginning, and I start with hand positioning, tracking skills and orientation of the page — all the important, basic things to get your fingers moving in that direction [of reading braille],” Holland says. “I might start with shapes. I might even say, ‘Are these shapes the same, or are they different?’ You just literally want them being confident that their fingers can do what we’re asking them to do. That’s the beginning.”

After students pick up on page orientation, Holland then begins teaching them to read individual letters and words. While progressing through their individualized goals, they are also introduced to braille contractions, which are used as shorthand for common letter groupings (like “ar,” ch” and “ing”) and commonly used words (like “and,” “but,” “can” and “do”).

According to Holland, reading and writing braille tend to go hand in hand as well when it comes to her course’s curriculum.

“I think they’re both really critical pieces,” says Holland of the balance between reading and writing instruction in her class. “A lot of times, even if there’s just a straight reading/fluency goal, we would still do both. I think it helps reinforce all the contractions by brailling it as well as reading it.”

As students move forward in her course, Holland makes sure to keep them updated on the improvements they’re making, which she ultimately finds joy in.

“They’ll be like, ‘How many words per minute did I get?’ They want to achieve and get faster,” she says. “It’s so fun when these kids learn their code — you just see the excitement.”

At the end of the day, Holland finds that her love for the braille code tends to be reciprocated by ISBVI students as well.

“I’ve got a lot of really great students,” Holland says. “I think they’re all really excited about learning braille for the most part. Hopefully, I can build on that.” 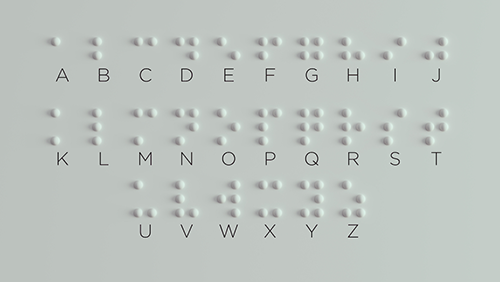