Less than a week after visiting Conner Prairie to give the living history museum feedback on the accessibility of its Headless Horseman Festival, members of ISBVI’s No Limits Leadership Club file into the Eiteljorg Museum of American Indian and Western Art as part of another after-school trip. The students are met by Alisa Nordholt-Dean, who gives them a warm welcome while also discussing some of the accessibility improvements the museum has recently made. 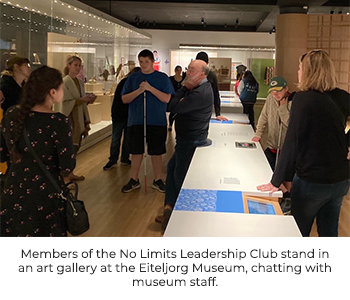 “We had the wonderful opportunity to work with the previous Leadership Club [from 2019] and loved that those students brought so much information to us and were so passionate about the museum and what we do,” says Nordholt-Dean, vice president of public programs and Beeler Family director of education at the Eiteljorg. “So we’re very excited to hear what you have to say.”

Specifically, Nordholt-Dean and the rest of the Eiteljorg staff are seeking the students’ feedback on updates the museum has made to their newly remodeled second-floor Native American galleries. In addition to making the galleries more spacious, the Eiteljorg Museum now also has audio descriptions for 21 pieces of art featured on the second floor. These detailed audio descriptions were done by local audio describer Jen Anker and can be accessed for playback by scanning a QR code next to each corresponding piece of art.

“As you’re going through and exploring that space, if you encounter anything that you’d like to share with us on what we can do better, please let us know,” Nordholt-Dean tells the students before they venture into the galleries. “We really value your feedback.”

Dating back to April 2019, the Eiteljorg Museum and IBCF have worked together on several initiatives to make the museum and its artistic experiences more accessible to all. After a number of visits to the museum, both mediated and non-mediated, the 2019 Leadership Club worked closely with staff members and key volunteers at the Eiteljorg to provide strategies and solutions to increase access at the museum overall. While the COVID-19 pandemic temporarily halted some of the progress on these items, it did not deter the Eiteljorg Museum from moving forward in specific areas, such as web accessibility and the addition of audio descriptions of artwork in both its permanent and temporary exhibition galleries. 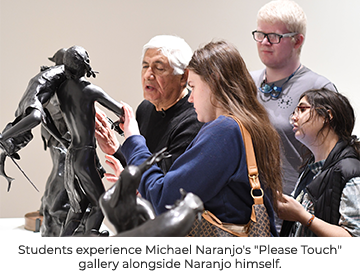 With the encouragement and support of their partnership with IBCF, the Eiteljorg Museum was able to bring renowned Santa Clara Pueblo ceramic artist Michael Naranjo to the museum in February 2020 as an artist in residence, and host a fully touchable exhibit of his work, Please Touch: The Art of Michael Naranjo. Both the exhibit and Michael’s residency were years in the making and incredibly worth all the time and effort that went into the planning phase.

“He [Michael Naranjo] was phenomenal to work with, and that was absolutely because of the partnership that we have with IBCF,” Nordholt-Dean says.

Now that COVID-19 restrictions have lessened, IBCF looks forward to continuing this enriching partnership with the Eiteljorg Museum, as more and more in-person opportunities become available. While the No Limits Leadership Club continues to identify ways that the museum can be more accessible, IBCF and the Eiteljorg have also worked together to bring Eiteljorg Museum artists in residence to ISBVI, where each artist in residence leads a special activity in Leslie Walsh’s art classes. 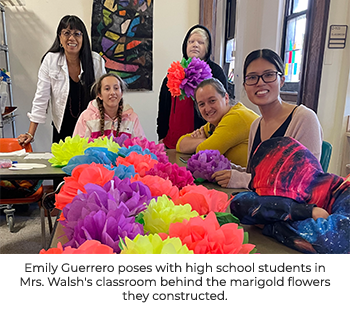 Recently, on Wednesday, Oct. 5, for example, Eiteljorg artist in residence Emily Guerrero led students in an activity where they crafted a marigold flower out of several sheets of colored tissue paper. A storyteller and folk artist of Mexica indigenous ancestry, Guerrero explained how the marigold flower is native to the Americas but now holds its own significance in various other cultures.

“People know the name of a marigold, but they don’t know that it was carried over to Europe and Africa. It became another tradition for people there,” Guerrero says. “India uses them for celebrations because they feel they’re radiant. We use them for the Day of the Dead, for calling spirits home. So the same flower, which traveled like a sailor or a migrant, went over the ocean and became new again, and that’s who we are as people. We might leave Indianapolis, go live in Columbus, and we pick up new traditions and stories. So I’m looking for common ground with how we each are unique but also belong to community. We grow where we’re planted, and then we get transplanted.”

Next month, Eiteljorg Museum artist in residence Karen Ann Hoffman of the Oneida Nation of Wisconsin will visit ISBVI and lead Mrs. Walsh’s art classes in learning about traditional Iroquois raised beadwork. Looking ahead, IBCF executive director Laura Alvarado looks forward to continuing the foundation’s partnership with Eiteljorg, ensuring ISBVI students are granted engaging arts experiences while also helping the museum to be a more accessible place for all.

"The No Limits programming is a win for arts organizations and our Leadership Club students,” says IBCF executive director Laura Alvarado. ‘Arts organizations learn how to be more inclusive of individuals with visual impairments directly from young people who experience both physical and social barriers on a daily basis. Our students gain the confidence to voice their concerns and ideas for a more inclusive environment for people of all abilities. Through these partnerships, relationships are formed between the arts organization staff and our students. The barriers take on a new meaning to the arts staff because they are no longer an abstract issue for someone they don't know; these barriers now hold a direct obstacle for the students they have come to know and bonded with. This is when the real change or motivation for increased inclusivity happens."