A class of second and third grade students makes their way into the elementary art classroom at the Indiana School for the Blind and Visually Impaired (ISBVI), as they prepare to embark on another creative adventure. This isn’t just any other Tuesday in art class, however, as Leslie Walsh’s students will have the unique opportunity to learn from nationally acclaimed Haudenosaunee raised beadwork artist Karen Ann Hoffman, who’s set to lead them in an interactive beadwork activity.

“What I do is put different shapes and textures together to make something out of beads,” Hoffman tells the class. 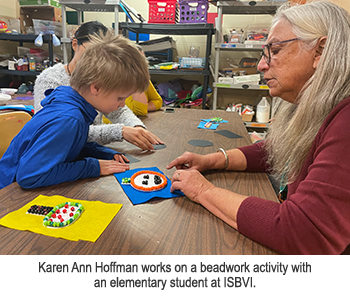 A citizen of the Oneida Nation of Wisconsin, Hoffman creates beautiful decorative pieces following the traditions of Iroquois raised beadwork. Honored by the National Endowment for the Arts (NEA) in 2020 as one of their National Heritage Fellows, she produces two to three large pieces each year, with some in the permanent collections of the Smithsonian National Museum of the American Indian, the Field Museum, the Iroquois Indian Museum, and the Oneida Nation Museum.

Hoffman’s visit to Mrs. Walsh’s art classes at ISBVI was again made possible through a partnership between the Eiteljorg Museum and the Indiana Blind Children’s Foundation (IBCF) that dates back to April 2019. Through this partnership, high school students at ISBVI also met with former Eiteljorg artist in residence named Emily Guerrero in October, who led them in another hands-on activity. Additionally, the No Limits Leadership Club at ISBVI continues to advise the museum on the accessibility of its galleries, in an effort to make its galleries more enjoyable for all.

Through her residency in particular, Hoffman says her hope was to show the students at ISBVI, along with all the other community groups she met with, that the Eiteljorg Museum welcomes everyone with open arms.

“We want to expand that notion that everybody can come and visit this amazing art,” Hoffman says of her Eiteljorg residency. “That’s what we’re really trying to demonstrate to the community.”