On a brisk day in late November, ISBVI students and staff exit a Miller Transportation bus just outside of Chicago’s iconic Millennium Park, as they make their way towards Cloud Gate a.k.a. “The Bean” for a class photo. For many of these students, this marks the first time they’ve ever been to a big city — much less Chicago. As the next 24 hours unfold, however, the group makes the Windy City its oyster, while learning a lot in the process.

On Nov. 30 and Dec. 1, 15 ISBVI high school students, along with ISBVI and IBCF staff, made their way to Chicago as part of the Bright Lights, Big City, Chicago Extravaganza. Dreamed up by ISBVI teachers Janelle Pivec and Josh Baxter, this trip was made possible through the Toula Oberlies Creative Arts Fund, an endowed fund in honor of the legacy of long-time IBCF board member, Toula Oberlies, that provides ISBVI students with once-in-a-lifetime creative arts opportunities.

As part of the Bright Lights, Big City, Chicago Extravaganza, students worked with Second City Chicago in a half-day improvisational workshop, experienced an accessible Broadway Chicago production of The Lion King, and toured DePaul University's Theatre School. While taking part in these engaging arts experiences, the students gained a wealth of knowledge on the multi-dimensional world of theater performance, as they explored everything from acting games to set and costume design.

Upon learning of the TOCAF grant opportunity, Janelle Pivec and Josh Baxter quickly got to brainstorming an experience that would impact ISBVI students.

“When I first spoke with [IBCF executive director] Laura Alvarado about the grant, I started thinking about all the opportunities that I have experienced in the arts over the course of my schooling, and I knew that this was the way to have those same eye-opening experiences for our students,” Pivec says. “I instantly started thinking about how the grant would allow our students to get closer to the performing arts and artists, and that proximity would make those experiences so much more meaningful.”

As Baxter and Pivec began to consider a potential destination for their theater adventure, Chicago eventually emerged as the frontrunner. 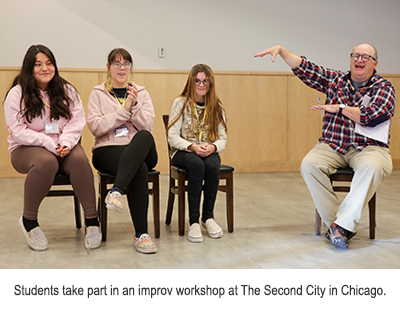 “Chicago seemed like the Hollywood of the Midwest to us, and we knew we could organize a big city experience for our students,” Baxter says. “After researching the rich theater scene in Chicago, we knew we had picked the right place that had multiple options for all our needs.”

After visiting The Bean, Baxter and Pivec took their students to The Second City for the first leg of their immersive Chicago theater experience. While at the historic improv comedy destination, the students engaged in a myriad of improvisational games, while exercising their acting skills.

“The guy that was working there was named Nick, and he got everyone from the group involved in these neat improv games that we played and could take back with us,” says ISBVI student Nate of the group’s time at Second City. “Those got us interacting with people in our class and were just fun engagement games.”

While at The Second City, Baxter and Pivec were also impressed to see their students using some of the skills they’ve worked on in theater class at ISBVI.

“Our theater class was at times intentionally shaped around providing the students with the improv skills we would need to be prepared to have a great Second City experience,” Baxter says. “Although it would have been fine if we hadn’t known much about improv or acting beforehand, it was noticeable that our students were more than prepared to enjoy Second City at a higher level due to their practice with theater and improv fundamentals. Second City was a great way for our students to work towards getting comfortable with acting through the semester and put it on display at a world-class theater institution. They were impressive educators who were as entertaining as they were informative. Second City was more than we expected it could be.”

Following their Second City workshop, the students briefly returned to the hotel to freshen up before heading to an accessible Broadway Chicago production of The Lion King, where students accessed audio description, the narration of the visual elements on stage, via audio description headsets. 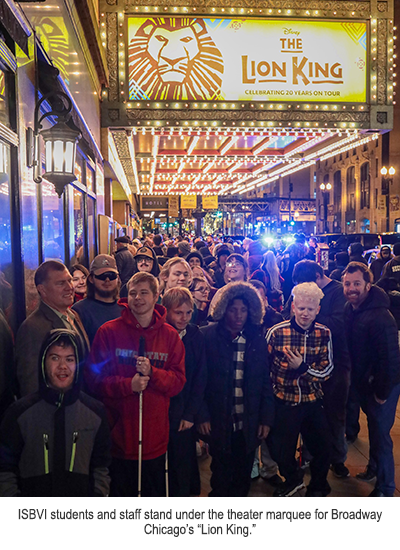 “They had people come in from the audience to go on stage, which was pretty cool,” says ISBVI student Tyler. “You don’t normally see that down here in Indianapolis — you usually see it in the big ole fancy cities.”

This awestruck reaction to The Lion King  production was ultimately one that Baxter and Pivec observed from all their students throughout the show.

“The Lion King  is known for its innovative, immersive experience, and we knew that the students would be enveloped into the show,” Pivec says. “The moment the first animal walked past our students, their smiles never left their faces.”

“I think that was just awesome because you never really think about that when you’re watching the play itself,” says ISBVI student Cory of the DePaul Theatre School tour. “But then, when you go behind the scenes and look at all that, it’s like, ‘Wow! There’s really so much hard work that goes into everything that they do.’”

To close out their time at DePaul, the students took part in a workshop led by voice/speech teacher and dialect/vocal coach, Sammi Grant, who in addition to speaking to students about her career was able to relate to the students as a student and theater professional with a visual impairment

“Showing our students what it took to put together what they had been to the night before really brought everything home for them,” Baxter says of the overall experience at DePaul. “From an actors panel, to wigs, costumes and makeup, to vocal direction, DePaul opened our students’ minds up to how many ways there are to enter into the world of theater.” 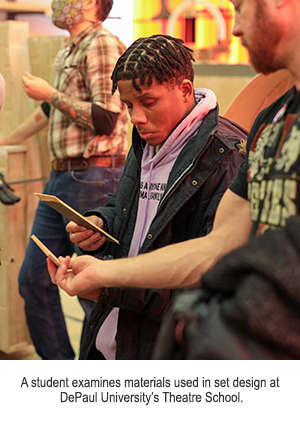 Having now had some time to reflect even further on the trip, both Baxter and Pivec couldn’t be happier with how everything went.

“Trips with large groups of students, even fun ones, can be tiring, and have their issues. This trip was fortunate to escape pretty much anything negative,” Baxter says. “It was seamless and had an energy with the whole group that sustained everyone there. Whenever something goes really right in life, it has a feel to it, and this trip had that feeling.”

As the students head into their second semester of theater class at ISBVI, Baxter and Pivec hope they continue to expand upon the knowledge they picked up while in Chicago.

“I hope that our students continue to hone their skills of storytelling and character development as we continue our work in theater class,” Pivec says. “The experience in Chicago pushed them to think more about creating a story and less about going for the funny punchline.  I also hope that the students continue to be open to the possibility of participating in any and all aspects of theater in their future.”