A Graduation to Remember

“Success is not final, failure is not fatal; it is the courage to continue that counts.” —Winston Churchill, 2017 Class Motto

On June 9th, 2017, the Indiana School for the Blind and Visually Impaired commencement ceremony took place.12 students graduated and showcased their bright futures as they walked across that auditorium stage. All 12 students were beaming with gratitude and support from the ISBVI community. The commencement ceremony began promptly at 10 A.M., and we celebrated our graduates with pride. The ceremony included beautiful music by Ms. Janelle Pivec, the ISBVI middle school/high school choral director, along with the ISBVI middle school/high band performing under musical director, Fritz Graf. The day was met with a whirlwind of emotions, and will be a day the graduates remember for years to come. Congratulations again to our 12 ISBVI graduates! 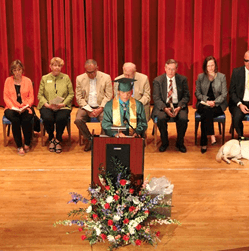 The 2017 ISBVI Class Valedictorian, C.A., spoke of his appreciation for all he had learned along the way at ISBVI. During his speech he stated, “When you reach other obstacles in your future, turn them into opportunities. You have the choice. You can overcome and be successful, or you can allow it to overcome you and be a failure. The choice is yours and yours alone.” Alongside the ISBVI Valedictorian the Commencement Speaker, Jim Platzer, also gave a moving speech discussing the possibilities present today for children with blindness or low vision. We are thrilled to have Jim joining IBCF for the upcoming Through the Looking Glass Gala as this year’s keynote speaker.

Jim Platzer is a former President of a fortune 500 company, and he began to lose his sight at age 20 which forced him to retire earlier than anticipated. Now he enjoys his time by being a motivational speaker, and someone who advocates for people with blindness or low vision.