“I wanna do something that matters … “ 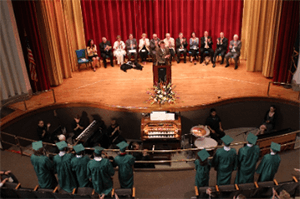 On May 25, the Indiana School for the Blind and Visually Impaired (ISBVI) celebrated the graduation of 9 young people. Graduation is also a proud day for us at the Indiana Blind Children’s Foundation (IBCF), since supporting our students on their path towards independence and living their fullest potential is the reason we exist. This group of graduating seniors brought the number of graduates the IBCF has been privileged to serve since 1993 to a total of 323. Commencement speaker, Steve Beres- Service Members and Veterans Affairs Manager for Regions, who served in the U.S. Army Special Forces all over the Middle East until he lost his sight during combat in a traumatic accident.

Because this is IBCF’s 25th anniversary year, the ceremony seemed especially moving. As always, as the ISBVI band played “Pomp and Circumstance,” each student walked proudly – individually and alone – up the steps on the left and across the stage to receive their diploma, stopped to shake hands with members of the School leadership, and continued to the right side of the stage, down the steps, and back to their seats. Then the choir sang “I Was Here” by Lady Antebellum, the song chosen by this year’s seniors:

When it came time for Steve Beres to speak, he, too, reiterated the theme of making something special of your life. “Don’t let anyone tell you no, or that you’re unable to do something,” he said. And to drive the point home he gave an unmarked envelope with a card in it to each graduate … except that one card said “winner.” That student, he explained, would have the opportunity to do a tandem sky dive alongside him – each of them accompanied on the jump by a professional parachutist. And the winner Christian – who (along with his mom, former Air Force) was thrilled! The jump is scheduled for July 12. Stay tuned! In the meantime, celebrate with us as each of these 9 new graduates strives to “do something that matters … with the time I’ve been given.”