For Debra Wilson, Geri Imler and their daughters, volunteering at Indiana Blind Children’s Foundation events is truly a joy.

“Selfishly, I think we get even more from it than you guys get from us,” Wilson says with a laugh. 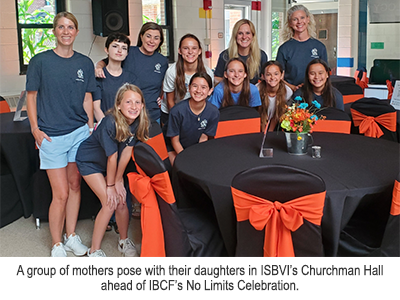 All a part of the National Charity League – Carmel Chapter, Imler, Wilson, and their daughters have volunteered at several IBCF and ISBVI events, including the No Limits Celebration in July, the NCASB Conference Championship Track Meet in September, and the Holiday Tree Sale and Family Event on Dec. 3.

As a multi-generational philanthropic organization of mothers and daughters, the National Charity League (NCL) donates close to three million hours annually to over 6,000 charities in the United States. Consisting of about 200 mothers and their daughters, the NCL’s Carmel Chapter was thrilled when they first found out about IBCF and its mission.

“When you guys came up, I instantly jumped on it,” Wilson says. “You’re dealing with a foundation for blind and visually impaired children, and it’s special. It just warmed my heart.”

Once a high school English teacher, Imler has since shifted her focus to volunteerism since having twin girls. Through NCL’s Carmel Chapter, she’s enjoyed being able to share her passion for helping others with her three daughters.

“I’ve always been a volunteer and my kids have seen that,” Imler says. “But then, when I came across this, it was a way for them to volunteer with me, see why I do it, and look into other worlds. Carmel can sometimes feel like a little bubble of blessing for everybody here, so I wanted them outside of that bubble to see that sometimes it’s not always as easy as people make it look. And to feel that type of gratitude when you’re able to help somebody who has it a little bit harder than you.”

Through volunteering with IBCF, Imler hopes her daughters can gain some meaningful perspective. 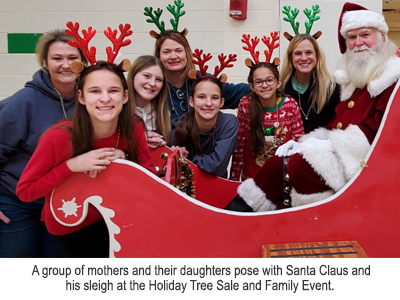 “I want them to be able to see that there aren’t just financial challenges. There are also other challenges that people face, and they’re able to overcome them while still being positive in life,” Imler says. “So when they [my daughters] come up against a challenge that they’re not used to in their own lives, they can maybe draw on that experience of seeing how other people do it with such grace and such joy and realize that it’s not the end for them.”

Looking forward, NCL’s Carmel Chapter is especially excited to volunteer at the 2023 ISBVI summer camps, which are made possible with support from IBCF.

“I cannot wait for when you guys do the summer camps and our girls get to help there,” Wilson says. “That’s going to be huge for them.”